So…..um, hi. It’s been a minute. I can honestly say I have been meaning to sit down and write out an update since my last post was…..um, a minute ago.  But I plead that we have had 3 birthdays, 2 holidays, 1 school play, 2 auditions (the kid), 1 school break, 2 doctors appointments, 3 scans….and a partridge inna pear treeeeeeeee!

Overwhelmed by holidays and birthdays and general end-of-the-year insanity, I kept meaning to send out an update, but when I had time, I didn’t have motivation. And vice-versa. I kind of managed to get through holiday insanity this year, but I’m not really sure how because it felt like I didn’t have enough time or my act together. But….we made it.

So. Updates. I actually have something.

My yearly check-in with Dr. PCM-Traffic-Director last summer lead to follow up labs 3 months later in November, and surprisingly Doc added Cobalt and Chromium checks to my labs. B12, Iron panel, TSH, T4, CBC were all pretty good. Most of my levels have stabilized since the MRSA mess of 2016, and thyroid levels meant no change in my Synthroid dose. But my Chromium and ….well, mostly my Cobalt levels sent doc to an ortho surgeon referral.

I have a giant hunk of metal for a left hip. I’ve covered that pretty extensively in the past…

…and November 19th was the 10th anniversary of my hip surgery. Diagnosed in my 20’s, snarled at and told to lose “as much weight as I can”, and several ortho docs attempting to get me close to my 40th birthday (I had the surgery the day before my 34th birthday) later, I got a shiny new hip.

My docs have just started watching my cobalt and chromium levels in the last 4?ish years and I have learned that there’s:

and unfortunately us implant patients pretty much all eventually end up climbing the ladder.

Ortho docs like my case. They get to learn from me and I’m a pretty unusual case. At this point it’s labs and x-rays, basically yearly. I have a whole file I keep with my op report, yearly scans, etc. Ortho doc went over my case, read my file, checked my labs, examined me, and sent me down for this year’s scans.

Two things popped up this year. 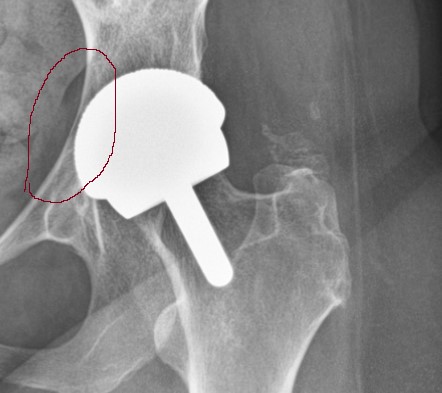 One: it seems pseudotumors can pop up around the implant area, and my cobalt levels indicate that may be the case with me. He found one spot in particular to watch, but conceded it could reabsorb on its’ own, or it could just be bowel gas. Options for further studies include a higher level MRI to account for the affect from the metal or an in-office procedure to get a sample from my hip to test cobalt levels. I told him “That does NOT sound like fun.” He just looked at me.

Two: I have Myositis ossificans (calcified muscle tissue). Huh. I didn’t know that could happen.

So, after I told him shoving a giant needle into my hip joint wasn’t my best idea for fun, he conceded that he could check my levels again in 6 months and we can go from there. He seems pretty good, and I like him. I think the only argument we may have is if he decides I need a revision. I’m not really open to hip replacement revision surgery. That’s why I had the surgery I did 10 years ago. But it’s really interesting that most people just assume I would have the surgery.