(Good Lord, has it really been a month since I published a blog??!!)

Yesterday was my follow up with my neurosurgeon and my oncologist in Georgetown. It was time for a follow up as I close in on a year post treatment, and with a ER trip courtesy of THE WORST migraine I’ve ever had last month, everything got moved up just a little bit.

Yesterday was also the day that my Dad died 3 years ago from Cancer.

So when I had to call my Mom a year ago and tell her that her only child has a brain tumor, you can imagine how much that sucked. She was brave and strong and supportive, but I don’t doubt for a minute that when she hung up the phone she cried and threw things.

I’ve made it through a year. An initial brain MRI (non-contrast, 6/09/14), a follow MRI to confirm diagnosis (with & without contrast, 6/20/14), the addition of a neurologist into my roster of doctors, and finally a referral to Georgetown last July. Once I was up at Georgetown and meeting with a neurosurgeon and a radiation oncologist, plans were made, options weighed, and soon a treatment plan was drawn up. I have a Meningioma.

I say have because it’s still there, but that part of the story is coming.

I have a meningioma,  a type of tumor that is typically benign, and usually easily treated by removing the damn thing because it’s a type of tumor on the lining of the brain, or the meninges. But not mine. Nope. MY tumor is a meningioma, but it’s alllllllll the way under the fold of the brain, near the brain stem, and therefore inoperable. So my treatment plan was 5 days of stereo-tactic radio surgery, or roughly the equivalent of 30 radiation treatments.

I had the same mask made that Geena Davis’s character on Grey’s was seen in last season.

For what it’s worth, I have to say the making and wearing of the mask (designed to keep me in the exact same position for treatment each time) was the weirdest part of the whole thing. It’s just a bizarre experience going through the molding of the mask, and then the clipping down of it each time you go in for treatment.

So I had the mask made, did the treatment, survived the side effects, and moved forward, ending last year with a three-month follow up on treatment with another brain MRI, which showed no change. The last year of my life could be tentatively titled “Is The Damn Thing Going to Kill Me?”.

(I have spent A LOT of time in CTs and MRI machines over the past year. Good thing I’m not claustrophobic.)

Which brings me to now. Yesterday’s scans showed….say it with me….. no change. (Possibly my least favorite phrase in the English language now.) But my docs all said that was mostly a positive thing because that meant 1) they had, in fact, diagnosed a meningioma correctly (Dr. Collins: “If it disappeared, we’d actually be more concerned.”) and 2) it’s not any smaller, but it’s not any bigger, there aren’t any more tumors, and that means it’s probably going to just stay put from now on. 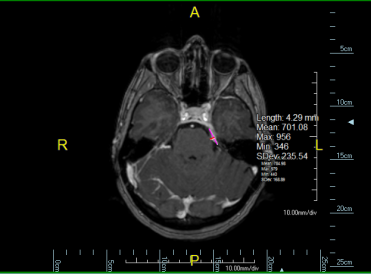 So, here we are. Me and…..Perceval? Harold? Irkle? He? She? It? needs a name since it’s me and this thing, likely for the rest of my life.

Today, I started processing this. This means it’s time to burn my mask, I think.

Yes, I saved it. I brought it home after treatment. It means I fought back and I survived. But Dr. Herman burned hers when she decided against any more radiation. I think I may do the same.