Our country has never been more divided. And Lord knows we are divided about everything! Gun control, abortion, death penalty, health care, religion, our military….you name it, there’s a huge divide on where people stand. The hidden truth is that really only 10% of any given population has a very right or left wing approach to the issue at hand or an extreme opinion. The other 80% typically find themselves some where in the middle of the whole thing.

Most of the time, I am in that 80%. I try very hard to understand both sides of an issue and I understand that on the really big issues, there is never an easy or a “right” answer. I may lean a little left or a little right on a specific issue, but for the most part I’m the 80%, some where in the middle. Trying to understand the points and the passions of each sides argument and apply the critical thinking I learned in college.

But one of the very few things that really set me off on a tear is the debate on the flu vaccine. That is one issue that I feel very strongly about and I find myself unable to understand the people that are on the diametrically opposite side of this thing.

I feel that Americans respond most strongly when their opinions are born of fear. We, as a country, are terrified of the big bad buggity germs that are gonna get us so we run out as quick as we can and demand the flu shot every year. But you know what? The rhetoric that the drug companies and the media feeds us about the flu shot is not true! Running out (dragging all your kids in tow) and lining up for the flu shot is not going to protect you the way that you think it will. 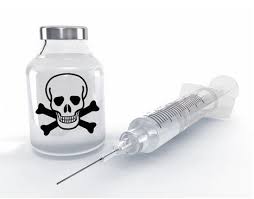 To start with, most people don’t realize that the “flu shot” is the CDC’s best guess of which virus is going to take off in the Winter cold season. But these guesses are made 9 months in advance by killing migrating geese in CHINA! That’s right, the CDC and the drug companies are guessing which 3 strains are going to spread based on info from pigs and migrating birds on the other side of the globe.

THEN, the “vaccines” are made up in the middle of Summer and injected into chicken eggs and grown. Finally, by September the vaccines are shipped and the American public is alerted.

We’re having numbers like “60% effective” or “reduces chances by 90%” shoved down our throats but those aren’t any more accurate than the guesses about which virus is going to infect you. The mass hysteria of the H1N1 virus in 2009 was because they guessed wrong! The CDC guessed wrong and emergency batches of H1N1 had to created in half the time it normally takes to manufacture a vaccine. Even then, the “pandemic” of the virus still only affected 7.7% of the population. There have also been reports that the “pandemic” was engineered to increase profits for the drug companies.

Because what you’re forgetting, as the average American, is that the drug manufacturers are in it to make money. Consider this: if the same company manufactures your “flu vaccine” and you still end up getting the flu, then they have created medicine…”Tamiflu” or “FluMist”….designed to shorten your flu symptoms and make you feel better. Either way, they’re still making a lotta money!

The hysteria of this week has sent me off on a tear. Just my 2 cents.
/end rant